Acts 17:10 Now the brethren at once sent Paul and Silas away by night to Beroea; and when they arrived, they entered the synagogue of the Jews. 11 Now these [Jews] were better disposed {and} more noble than those in Thessalonica, for they were entirely ready {and} accepted {and} welcomed the message [concerning the attainment through Christ of eternal salvation in the kingdom of God] with inclination of mind {and} eagerness, searching {and} examining the Scriptures daily to see if these things were so.  12 Many of them therefore became believers, together with not a few prominent Greeks, women as well as men.
Acts 17:16 Now while Paul was awaiting them at Athens, his spirit was grieved {and} roused to anger as he saw that the city was full of idols.
Acts 17:33 So Paul went out from among them. Acts 17:34 But some men were on his side {and} joined him and believed (became Christians); among them were Dionysius, a judge of the Areopagus, and a woman named Damaris, and some others with them.
Acts 18:1 AFTER THIS [Paul] departed from Athens and went to Corinth.
Acts 18:8 But Crispus, the leader of the synagogue, believed [that Jesus is the Messiah and acknowledged Him with joyful trust as Savior and Lord], together with his entire household; and many of the Corinthians who listened [to Paul also] believed and were baptized.  9 And one night the Lord said to Paul in a vision, Have no fear, but speak and do not keep silent; 10 For I am with you, and no man shall assault you to harm you, for I have many people in this city. 11 So he settled down among them for a year and six months, teaching the Word of God .
Acts 18:24 Meanwhile, there was a Jew named Apollos, a native of Alexandria, who came to Ephesus. He was a cultured {and} eloquent man, well versed {and} mighty in the Scriptures.  25 He had been instructed in the way of the Lord, and burning with spiritual zeal, he spoke and taught diligently {and} accurately the things concerning Jesus, though he was acquainted only with the baptism of John. 26 He began to speak freely (fearlessly and boldly) in the synagogue; but when Priscilla and Aquila heard him, they took him with them and expounded to him the way of God more definitely {and} accurately.  27 And when [Apollos] wished to cross to Achaia (most of Greece), the brethren wrote to the disciples there, urging {and} encouraging them to accept {and} welcome him heartily. When he arrived, he proved a great help to those who through grace (God’s unmerited favor and mercy) had believed (adhered to, trusted in, and relied on Christ as Lord and Savior). 28 For with great power he refuted the Jews in public [discussions], showing {and} proving by the Scriptures that Jesus is the Christ (the Messiah).
Apostle Paul and Apollos preached to the Jews , and many of them next  became Christians
(Rom 10:15 KJV)  And how shall they preach, except they be sent? as it is written, How beautiful are the feet of them that preach the gospel of peace, and bring glad tidings of good things! 16  But they have not all obeyed the gospel. For Esaias saith, Lord, who hath believed our report?
(Rom 2:11 KJV)  For there is no respect of persons with God.
(Rom 3:22 KJV)  Even the righteousness of God which is by faith of Jesus Christ unto all and upon all them that believe: for there is no difference:
(Rom 10:12 KJV)  For there is no difference between the Jew and the Greek: for the same Lord over all is rich unto all that call upon him.
(Heb 13:8 KJV)  Jesus Christ the same yesterday, and to day, and for ever. 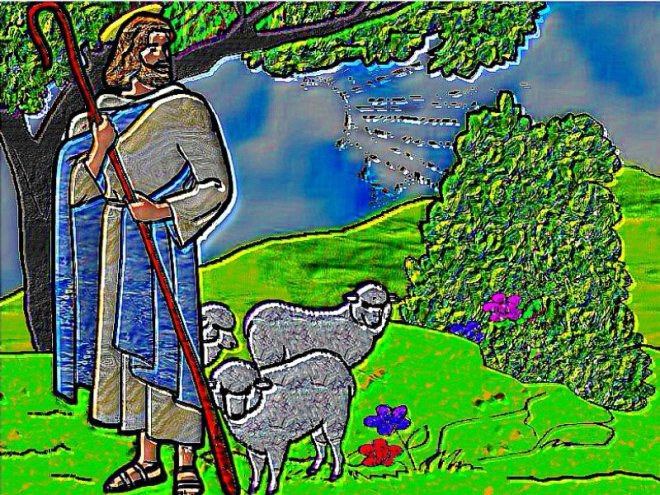 “Endorsing from the Pulpit Pastors launch challenge of IRS rules on endorsements.
Pastor Gus Booth remembers when he used to simply encourage his congregation of 150 in Warroad, Minn., to vote each Election Day. Now, he thinks it’s important to tell them which candidate should get their vote. On Sunday, as part of the “Pulpit Initiative” organized by an Arizona-based conservative Christian legal group, Booth is set to join dozens of clergy nationwide in challenging Internal Revenue Service rules that prohibit churches from politicking by supporting or opposing candidates. “If we can tell you what to do in the bedroom, we can certainly tell you what to do in the voting booth,” said the Minnesota minister, an evangelical leader of a nondenominational church, who expects to endorse Republican John McCain during his “Pulpit Freedom Sunday” sermon. “The voting booth is not some sort of sacred cow that you can’t talk about. You’re supposed to bring the gospel into every area of life.” The Alliance Defense Fund announced the initiative last May as a way to challenge IRS rules that date to 1954. ADF spokesman Greg Scott said the organization contacted “pastors, priests and rabbis from every major denomination,” and knows of 33 clergy in 23 states who intend to take part on Sunday. At least one clergyman who was contacted joined in filing a complaint against the initiative with the IRS. “We’re basically aiming to get these rules declared unconstitutional so that pastors have the right to speak freely from the pulpit without fear of punishment,” said Dale Schowengerdt, legal counsel for the ADF. “http://www.christianitytoday.com/ct/2008/septemberweb-only/139-41.0.html
“Pulpit Initiative About Freedom, not Politics
The purpose of the Alliance Defense Fund’s Pulpit Initiative is to restore the right of pastors to speak freely from the pulpit without fear of punishment by the government for doing what churches do: speak on any number of cultural and societal issues from a biblical perspective. The purpose of the Pulpit Initiative is not – as some have said to confuse the issue – about whether pastors should or should not “endorse” candidates. The issue with which ADF is concerned is over who regulates what may be said from the pulpit.

So, the Pulpit Initiative is not about…

The Pulpit Initiative is…

· a bold defense of the First Amendment’s Establishment, Free Exercise, and Free Speech clauses
· about protecting core religious expression
· only related to what a pastor says from his pulpit, for example, on a Sunday morning (i.e., not about voter guides, candidate appearances, or other “political” activities)

Certainly, congregations and a church’s leadership can tell pastors they don’t want names of candidates spoken from the pulpit. But that is very different from government censorship. To government regulators, today’s “Gospel” may well be words that are tomorrow’s “politics.” ADF has already defended Americans in many cases where publicly preaching words straight from the Gospel has led to censorship…and even jail.  The bottom line is that no enforcement agency of the federal government should be telling a pastor what he can or cannot say from his pulpit about the Bible and his church’s teaching on the issues of the hour – even if the pastor’s sermon applies Scripture and church teaching to candidates and elections. Such agencies certainly cannot condition tax-exempt status–a status churches have always been constitutionally guaranteed since our founding–on the surrender of cherished First Amendment rights. In fact, for 166 years, churches freely preached directly on political candidates’ qualifications for office. That was no problem when the Constitution was signed, or when the first Commissioner of Internal Revenue was appointed in 1862, or when the federal income tax was authorized by the 16th Amendment in 1913. Nor were churches transformed into political machines. When the IRS code was amended in 1954 to ban “intervention” in political campaigns, it was an act of political retaliation by then-Sen. Lyndon Johnson against two anti-communist groups. It had nothing to do with “church politicking,” and scholars agree that churches were not the target of the regulation. ADF has the U.S. Constitution and the weight of American history on its side. Those who oppose the Pulpit Initiative have yet to make one constitutionally-derived argument against it. It is ironic that they laud the “separation of church and state” in opposition to the Pulpit Initiative, but by opposing the initiative, are asking for continued government control and censorship of a pastor’s sermon.The pulpit is no place for government regulators.
http://newsweek.washingtonpost.com/onfaith/guestvoices/2008/09/pulpit_initiative_about_freedo.html

Pastors do not have to break the law. They can merely live by faith in God to provide and now discontinue from giving out tax receipts on all donations and thus be free to speak as any ordinary citizen can. The Bible does not prohibit them from doing this now as well   like Rev George Mueller did too.

“I was surprised at how many clergy are willing to go back on their institution’s promise to comply with the IRS 501c3 laws that provide guidelines for nonprofits on staying publically neutral in order to benefit from tax exempt status.Need a refresher?  Here are the IRS laws for non-profits regarding the Restriction of Politcal Campaign Intervention.  By flagrantly violating these restrictions, those clergy might as well buy all of their home furniture and ask to have it tax free or all of their family’s clothes and say it’s tax free– just pay for it and present the tax free certificate for your religious institution because those are also restrictions.This is not leading by example, but to the contrary, instead of working to change the laws those 33 (and plenty more besides them) pastors are proud to break the law.  How do the parishoners explain those values to their kids?  Spitting in the face of the law by advocating a candidate from the pulpit is even more difficult than explaining a personal failure of judgment by a clergyperson because  the religious institution itself is defying the law of the land. Perhaps the participants of the Pulpit Initiative could benefit from learning a Jewish law concept: dina de-malkhuta dina, when the law of the land takes precedence over anything else.
Here is a short piece from MyJewishLearning.com as part of an article on business ethics and paying taxes:  Taxes and Tax Evasion   Considering the scope of Jewish business law, it is not surprising that it also has a clear opinion regarding tax evasion. Eighteen hundred years ago the [Talmudic sage] Shemuel established the legal principle that in civil matters dina d’malkhuta dina—“the law of the land is the law” (B.T. Bava Kama 113a). In its discussion of this principle, the Talmud specifically includes taxation as a secular law that must be followed. This, for example, is the way Maimonides summarizes this law (Mishneh Torah, Laws of Theft 5:11):“[…] but a tax fixed by the king of 33% or 25% or any fixed sum… a person who avoids paying such a tax is a transgressor because he is stealing the king’s portion, regardless of whether the king is Jewish or not.”Of course, these clergy don’t really follow what the Talmud says, but the idea that such a concepts exists and has for thousands of years should be a wake-up call for these people. No doubt the government has quietly avoided prosecuting many offenders of the 501c3 laws for a variety of reasons.  “
http://www.chron.com/channel/houstonbelief/commons/persona.html?newspaperUserId=rabbiweiss&plckController=PersonaBlog&plckScript=personaScript&plckElementId=personaDest&plckPersonaPage=BlogViewPost&plckPostId=Blog%3ArabbiweissPost%3A1de40cf3-411b-4ece-97e1-e019839be550

Pastors Plan Pulpit Political Sermons to Defy IRS
KARK, Little Rock – Churchgoers in 22 states may hear a sermon unlike anything they’re accustomed to this Sunday. The “Los Angeles Times” reports Christian ministers will use …